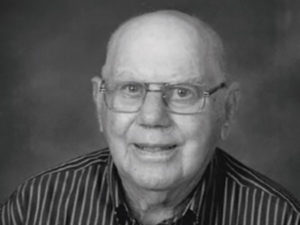 Dear Readers: People with total recall of names, dates, places, events and experiences, even long past, are said to have photographic memories. In today’s column we’ll meet Bryce Coggins, a local farmer and writer who uses his skill with words, remarkable memory and love for our area to present an entertaining and accurate picture of life in rural Rusk County as he has experienced it for almost a century.

Born on a farm in Rusk County in 1926, Bryce says, playfully, that he was the “middle” child in a family of ten children. He attended Cloverland grade school and Tony High School and has many happy recollections of his school years. In 1950 he bought his own farm, close to the one owned by his parents, and moved into it the next year, with his wife, Pat. Bryce and Pat subsequently had six children, and one of their daughters and her family currently live on the original Coggins farm.

Bryce says even as a small boy his family relied on his exceptional memory to remember important dates and events. But, he says, even though he remembered so much about daily farm life and enjoyed writing assignments in school, he didn’t think about chronicling his memories until age 60 when he wrote a poem about his grandfather, a blacksmith in Knapp, Wisconsin. Bryce gave copies of the poem to his family, including his sister in Seattle. She liked it so much she sent it to a publication called the Small Farmers Journal, which printed it. Having that poem published, Bryce says, inspired him to keep on writing.

While he doesn’t consider himself a historian, Bryce says all his writing is related to his life in rural Rusk County. And having been a Rusk County resident for over 90 years, his keen memory and writing skills allow him to give readers a first-hand look at farm life as it was lived here nearly one hundred years ago and throughout the 20th century. Bryce’s topics are wide ranging: growing up in an age when almost all farm work was done by hand, work horses and other farm animals, the coming of farm machinery, rural schools, entertainment, and anecdotes about people and events. One story in particular stands out for him, an account of a time shortly before Christmas, when he was still a boy, and his mother suffered a near-fatal miscarriage. He wrote the story and, encouraged by family, entered it in a Christmas writing contest in the newspaper The Country Today where it won an honorable mention. Since then Bryce has had many of his stories published in The Country Today.

Bryce is a long time member of The Writers’ Exchange, a group of Rusk area residents who meet twice monthly to discuss and share their writing. He credits the group with giving him encouragement to continue writing his recollections. While he has no desire to write a book, Bryce is considering combining a collection of his previously written articles into a single volume.

When asked why he continues to write, Bryce replies, “Some day I’m not going to be here. People may want to ask a question (about local farm history) and I won’t be around to tell them. There’s a lot of stuff in my memory that isn’t in anybody else’s.”

Bryce is a frequent contributor to the monthly anthology of the Writers’ Exchange, which is free and available locally at the public library, the Visitors’ Center, and other Ladysmith locations, and several of his recollections appear in the book Tall Tales, Poems and Life Stories, available at the Rusk Area Arts Alliance Gift Gallery, 711 Lake Ave. W., in Ladysmith.