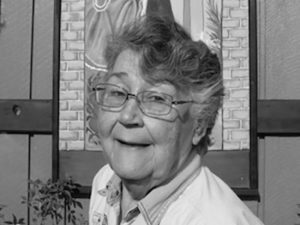 Dear Readers:  Besides being artists, what do Vincent van Gogh, Grandma Moses and Henri Rousseau have in common?  The answer may surprise you:  they are all self-taught. A little “digging” shows a significant number of visual artists, musicians and photographers have carved out highly successful careers with little or no formal training.  Instead, they’ve acquired the necessary knowledge and skills through their own intelligence,  initiative and determination. Today we’re going to meet Betty Morris, a local self-taught visual artist who, through her own efforts, has become a successful portrait artist, muralist, and popularizer of an old art form called ‘’Silent Companions’’ or ‘’Dummy Boards.’’

An Illinois native, Betty and her late husband, Chuck, were married in 1950 and had four children. In 1993 Chuck retired due to health problems. The couple then moved to Rusk County, where they restored a hundred year old farmhouse which had been in Betty’s family for many years, and where she still resides.

From a very young age, says Betty, she was fascinated by coloring and drawing and used scrapbook paper for her artwork. Her interest in portraiture, she reports, started when, as a child, she studied the pencil drawings of Norman Rockwell in “The Saturday Evening Post.” Betty said it was through the study of his portraits that she learned “shading,” an important drawing technique. As an adult, Betty began drawing portraits of friends and family from photos and, as her work became known, she started doing commissioned work. She relates that her portraits were all done exclusively in pencil until the day she bought a dollar “how-to” book on painting. Betty internalized the contents, practiced hard, and was soon doing portraits in oil and later acrylic.

Betty eventually branched out and began painting landscapes and rural scenes, many of which were displayed in local businesses in the Illinois town where she and her family lived. People began asking if she gave painting lessons and soon, Betty relates, she found herself teaching painting and drawing in her home studio.

Another important part of Betty’s art career has involved creating “Silent Companions,” or “Dummy Boards.”  In a brochure she prepared on the subject, Betty explains that this art form became popular in 17th century Europe when elegant homes often featured these lifelike boards by fireplaces and sometimes in gardens. To make these pieces, Betty explains, she first cuts life-size figures from 1/2 inch birch plywood, stains the backs and attaches a hinged stand. Then she seals the front and paints the figures in lifelike detail. Betty says she created her boards for over 40 years but has recently stopped because of the difficulty of doing the necessary wood sawing.

Mural painting is also one of Betty’s long-standing artistic interests. She recalls that she did her first mural — an outdoor scene celebrating a town centennial–while still living in Illinois. Here in Rusk County one of her outdoor murals, five colorful metal panels based on a storybook theme, can be seen in Miner Park on Miner Avenue in Ladysmith. Betty reports she has recently completed another outdoor paneled mural, this one for La Casa Mexicana restaurant located at 218 Worden Ave. E in Ladysmith.

Although she is no longer creating dummy boards, Betty maintains an active home studio where she does acrylic and oil painting, works on her murals, paints designs on furniture and creates “floor cloths” on artists’ canvas which she says are reminiscent of old-fashioned “punch needle” rugs.

Betty’s artwork can be seen and purchased in Ladysmith at the Fine Arts Center and Gallery, 105 Miner Avenue, and she can also be contacted for commissioned work through the Fine Arts Gallery at 715-403-1418.