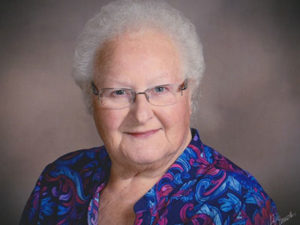 Dear Readers: What makes a writer write? A painter paint? What makes anyone, amateur or professional, in any of the arts do what he or she does? The answers, of course, are many and varied, but among the most basic certainly must be that the person loves the chosen art form. In our column today, we’ll meet Audrey Riphenburg, a Ladysmith resident, writer and world traveler who writes out of sheer enjoyment. She has authored several books and without setting out to, has become an unofficial chronicler of life in Rusk County.

A Rusk native, Audrey was born on a small farm in what she terms “rural Ladysmith” and, except for a few years teaching in St. Croix, has always lived in this county. After earning an education degree from UWEC Eau Claire, she taught middle grade students for several years, primarily history and English. In 1962 Audrey married Al Riphenburg and the couple began dairy farming near Conrath. Today, she says, the family farm is run by her daughter, Valerie, and her family.

Audrey says she never set out to be a writer, but as an adult got interested in writing because she “knits and crochets but finds writing more fulfilling.” Although she denies having a photographic memory, Audrey has keen and colorful recollections of the people, places, events and lifestyles of rural Rusk County starting when she was very young. These recollections formed the basis of her first book, simply called Audrey, in which she writes about what it was like to grow up in rural Rusk in the 1930s and 40s.

Writing her second book, Call Me Al, was a bittersweet experience for Audrey, because she wrote it for her husband when he was terminally ill. Looking for ways to keep him occupied, Audrey says she asked Al to “document” the development of their dairy farm and recount information relating to important people, places and events in his life. She says they searched family records together as Al recounted year-by-year happenings while she jotted down his recollections. Then she wrote up each account until she had a full-scale book that is not only an important family record but also a slice of Rusk County history. Audrey adds she was very happy and grateful to finish the book in time for her husband to read it through twice before he passed away.

Audrey loves travel and says she’s been privileged to visit all the world’s continents. Some trips were made with her husband and daughter, some with other people or groups, but on every trip, Audrey says, she has purchased a souvenir spoon relating to the country or area being visited. Of course these spoons made their appearance in Audrey’s third book—If These Spoons Could Talk—which gives a short history of the place at which each spoon was collected. Note: Audrey says she has 35 additional spoons which were collected after the book was published.

Spontaneity is something Audrey enjoys in her writing—letting ideas come to her when she sits down to write rather than always starting with a preconceived idea. Her fourth and latest book, Scribbles, is the result of the spontaneous writing down of what she calls her “random thoughts” on a host of subjects, including generous amounts of Rusk history.

Audrey says she has sold or given away almost all her books and has no plans to write more. But she is a long-time member of the Writers’ Exchange, a group of area residents who are interested in writing and meet twice a month in downtown Ladysmith. She is a frequent contributor to the group’s monthly anthology and today enjoys writing short essays, light verse and haiku. The Anthology is available, at no cost, at the Ladysmith Library, the Visitors Center, Toad House, and the Fine Arts Center among other area locations.