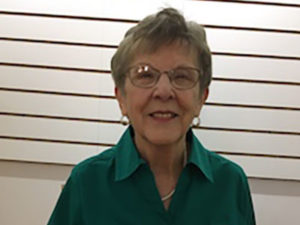 Dear Readers: “Folk art” has been defined as “art originating among the common people of a nation or region . . . reflecting their traditional culture” and is usually both useful and decorative. In today’s column we’ll meet artist and teacher Mona Kochendorfer, an accomplished folk painter and interpreter of ethnic painting styles, particularly those of Norway, the Netherlands and Bavaria.

Born and raised in Spring Valley, Wisconsin, Mona and her husband, Larry, moved to Amacoy Lake, near Bruce, in 1992. Mona attended the University of Wisconsin – River Falls, where she earned a Bachelor of Science degree in Education. She attended graduate school at River Falls, Eau Claire, and Stout. Mona’s teaching career began in 1957; she has been an art supervisor and teacher, a reading specialist in Wisconsin public schools, and an art instructor for Wisconsin Technical Colleges. She also gave private piano and organ lessons for many years.

Her parents, Mona says, encouraged her interest in drawing and painting from a very young age. She relates that as a teenager she was introduced to Norwegian Rosemaling by a neighbor and the “beauty of the unique flower forms, scrolls and use of color” started her on the road to a lifelong appreciation and study of ethnic painting.  While in college Mona’s art history instructors encouraged her interest in folk painting and she learned most countries have at least one ethnic painting form and sometimes varying styles within different regions. She also discovered that some painting motifs are universal but differ in style and color mixes from one country or region to another.

Mona reports she has been exceptionally fortunate to study ethnic painting with renowned folk artists in Europe and the United States. She says it has been “exciting” to learn the history of folk painting and various painting styles, which provide insight into the lifestyles and customs of people from other ages.

Her artwork has been selected for local, regional and national painting exhibits and Mona has had paintings and articles she authored included in international painting magazines and Wisconsin publications. She has taught at national conventions of the Society of Decorative Painters and shared her knowledge of ethnic painting with businesses and organizations throughout the United States. Mona’s articles on folk painting have appeared in such magazines as “McCalls” and “Better Homes and Gardens.”  She has been awarded four separate grants from the Wisconsin Arts Board to teach apprentices in the art of Dutch Folk Painting, and has written Hindeloopen Sampler, an instructional book on the art of Hindeloopen Folk Painting — a variety of Dutch ethnic painting in which Mona specializes.

Mona points out that unlike “fine art,” created largely for its aesthetic appeal, folk painting is utilitarian as well as decorative, and so appears on furniture, pottery and a variety of useable household objects. She personally enjoys working with large pieces of furniture, plates, trays and cupboards. In planning a decorative piece, Mona says she first studies the object, making sure her design fits its contours, then makes a rough sketch and plans the colors. Next she either paints the design freehand or uses chalk or a drawing tool to make a preliminary design which is later erased. Planning a painting, she says, “transports my mind to a distant country at a time long past,” and “mixing the colors. . . is like having the ingredients for all my favorite desserts lined up in front of me.”

Besides her ethnic painting, Mona does fine art, particularly landscapes and florals, and designs folk-art inspired notecards. She also does commissioned pieces.

Mona’s folk paintings and notecards can be viewed and purchased at the RAAA Gift Gallery, 711 Lake Ave. W. in Ladysmith.  She can also be reached at mtolebox@brucetel.com.