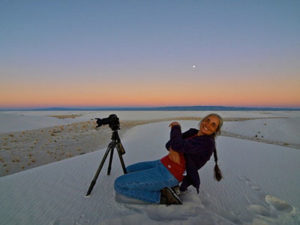 Dear Readers:  Those of us who live in Rusk County know it as a place of great year-round natural beauty, blessed with abundant wildlife, clear, clean rivers, large forested areas and the Blue Hills. If only we had the time and ability to get out there and record it all with a camera! Susanne von Schroeder, the artist we’re going to meet today, is a photographer who has spent much time documenting the beauty of Rusk County and northern Wisconsin. She specializes in capturing exceptional scenes and moments in nature in a way she hopes will create a sense of spiritual connection between the viewer and the photograph.

Susanne was born in Germany, near the Swiss-Austrian border. Her mother, she says, was an excellent gardener, growing both vegetables and ornamental flowers and plants, and it was through her that Susanne became interested in gardening and nature in general. When in her mid-teens, Susanne says she began to develop an appreciation for the “healing power” to be found by experiencing nature in solitude.

After high school, Susanne went on to complete a two-year degree in horticulture at a German vocational school. Upon coming to the United States in the late 1980s, she worked at a commercial greenhouse for a number of years before starting her own business, Clear Creek Nursery, north of Bruce. Susanne says it was the flowers she grew at Clear Creek, where she had an extensive display garden as well as greenhouses, that got her seriously interested in nature photography.  After closing her greenhouse several years ago, she began branching out into landscape photography, mostly choosing subjects within Rusk County, particularly the Blue Hills. She also does year-round photography around Lake Superior, capturing on camera the many seasonal changes and moods of the lake, sky and surrounding countryside.

Susanne uses a variety of lenses and filters to achieve particular camera effects, such as capturing the “blue hour”–a brief time just after sunset and just before sunrise when natural objects take on a fleeting blue tone. She also uses a technique called “panning,” which involves moving the camera during long exposures, in order to get certain abstract effects. Photographing the aurora borealis (northern lights) is another interest of Susanne’s, and one of her ambitions is to photograph some of the spectacular auroras found in Alaska and northern Canada.

“Soul Centered Photography” is the name of Susanne’s studio and reflects what she calls the “gift” of being able to take photographs that evoke an emotional connection between the viewer and the subject of the photograph. She says she hopes her work will “touch the soul” of those who see or purchase her photos and reports that many people have told her they experience a feeling of peace and healing after viewing her work.

Susanne has published two books of her photography, Seeing Beauty (Photography as Visual Poetry) and Allow What Is. Both are available by contacting Susanne through her website: www.soulcenteredphotography.net.  Her photographs are also available at Toad House and the Ladysmith Visitors’ Center, 205 W. 9th St. S., and at a variety of area art fairs, which she announces on Facebook under “Soul Centered Photography.”