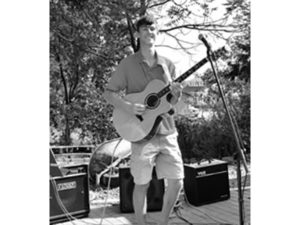 Dear Readers:  It’s safe to say that most people, even those of us who can’t carry a tune in a bucket or have never learned to play an instrument, enjoy music.  Whether it’s rock, gospel, blues, jazz, classical, folk or a host of other musical varieties, there’s something out there for nearly everybody’s taste.  And today we’re going to meet a young man from Rusk County who is combining several musical genres to create his own style, and compose his own music.

Sage Leary, at age sixteen, is at work on his second musical CD, titled “Free to Be,” having recorded his first one when he was just fourteen.  An accomplished guitar player and vocalist, Sage also plays bass and harmonica.  While he has always liked music, Sage says he became actively interested in music when he was eleven years old and started experimenting with his father’s acoustic guitar.  His interest prompted his aunt, Linda Hadjimarkos, to give him the gift of a set of guitar lessons at Morgan Music in Eau Claire.  Sage enjoyed his guitar lessons so much that his parents enabled him to continue them for another three years.

By age fourteen Sage had already written enough material to fill a CD, and undertook the challenge of professionally recording an album.  The result was “Feel the Sound,” an all-instrumental album recorded at a studio near Eau Claire.  After its release, Sage says he decided adding lyrics to his compositions would expand his musical possibilities and add depth of expression to his work.   He has taken singing lessons with a vocal coach in Eau Claire, and is also participating in online videos in vocal instruction.

When asked to describe his musical style, Sage says it depends on the subject of the song he composes.  While his music is heavily influenced by rock ‘n’ roll, it also contains elements of blues, country, Latin, funk and acoustic boogie.  Sage says his compositions are always about something specific, such as a particular emotion, time, place or event, and he tries to make his music reflect and evoke the musical subject for his listeners.

Unlike his first CD, which was recorded to demonstrate his skill on guitar, Sage’s second CD features his songwriting skill and talent on vocals, guitar, bass and harmonica.  He is currently working with WAMI (WI Area Music Industry) award-winning producer/engineer Tony Anders at Studio H in Appleton, WI, to create this full scale production.  “Free to Be” is expected to be released by mid-summer 2016.  Song previews and impromtu video clips taken in the studio during the recording phase can be seen on his YouTube channel, Facebook page, and www.sageleary.com, or simply Google search Sage Leary.

Through his music, Sage says he hopes to help make the world a better place and make people happy.  He looks forward to a career in music both as a performer and composer.  Although his studies as a high school junior keep him very busy, Sage still finds time to gain performing experience by playing for a variety of events in the Ladysmith area.  Anybody interested in having him perform for a party or event can reach him either through email sageleary@gmail.com, Facebook, or phone 715-312-0403.  Sage’s CD, “Feel the Sound,” can be previewed and purchased on his website, locally through Toad House, 711 Lake Ave. W. in Ladysmith, and also on the Internet through Amazon, iTunes, Google Play and Pandora.  Sage’s YouTube channel has a live video series of all the songs on his “Feel the Sound” CD.