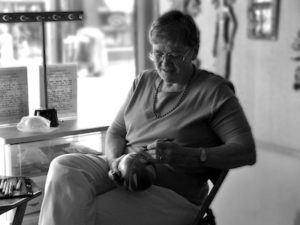 Dear Readers: A person with diverse or widely varying interests or tastes is sometimes called eclectic. In today’s column we’ll focus on local artist and art advocate Ruth Meszaros, who could be called “egg-clectic” because of the nature of a major part of her artistic work.

A New Jersey native, Ruth lived for a time in New York State, then attended the University of Chicago, where she majored in English Literature and met her husband, Paul. In 1973 Paul accepted a teaching position at Mt. Senario College, and the couple moved to Ladysmith.

Although she didn’t major in art, Ruth says she has always liked to draw and that “doodling and drawing” have been her hobbies since she outgrew coloring books. She reports she began “serious doodling” in 1970, using a drafting pen and colored pencils to create geometric designs and patterns. Eventually, inspired by a Christmas display of decorated eggs at the Chicago Museum of Science and Industry, Ruth decided to try creating her own egg art. She chose eggs, she says, because they offer a “perfect and intriguing form for transforming a two dimensional design into a three dimensional object.” Ruth describes her designs as ranging from “strictly geometric to . . . wildly imaginative,” and says “petals,” her variation on a teardrop shape, is the design for which she’s best known.

Ruth calls her creations “Unique Eggs by Ruth” and has a website for selling her work. Her decorated eggs are also available locally and have been sold in shops throughout Wisconsin. Ruth’s artwork has been displayed at libraries, fairs and exhibitions around the state, and she has done occasional commissioned projects. She says her greatest honor was being selected to have her “Wisconsin Egg” exhibited at the White House Visitors Center in Washington, D.C. in 2008 as part of an annual Easter display of decorated  “State” eggs.

After developing painful hands from the precise way she must hold the egg and pen while decorating, Ruth has cut back on her egg creations. Instead, she has concentrated on another art form — ornamental gardening. Ruth is well-known locally as a very accomplished ornamental and landscape gardener, and makes her garden available for fundraising tours, particularly for the Rusk Area Arts Alliance, of which she is a charter member. She confesses that while she loves all perennials, her favorite is the iris, especially a pure white re-blooming variety called Immortality, and she has over 100 additional varieties in her yard.

Lately Ruth has begun creating digital notecards and other digital art on her computer.  She has also “dabbled” in what she terms “wall art,”–drawing, collage and photography. Additionally, in collaboration with her daughter, Elaine Meszaros, she has created a coloring book entitled Abstract Designs: A Coloring Book for Adults.

Ruth brings a sense of energy and fun to her art activities and encourages all people to include some kind of creative expression in their lives. She believes strongly that active involvement in art, even if only for one’s own enjoyment, “brings out something creative in people that isn’t always apparent in everyday life.”