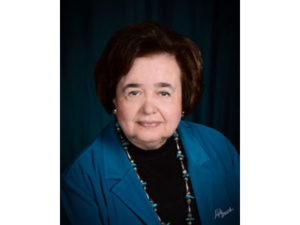 Dear Readers:  Many of us are familiar with “The Music Man,” a hit Broadway musical later made into a  popular movie. In today’s column we’re going to meet Karen Ek, who could be called The Music Lady for her work in music education and encouraging music participation and appreciation in Ladysmith and Rusk County.

Born in Chippewa Falls, Karen attended the University of Wisconsin–Eau Claire, where she majored in Vocal Music Education. Upon graduating in 1964, she accepted a teaching position with the School District of Ladysmith, where she remained until her retirement in 2002.

Karen recalls that when she began working in Ladysmith she was the only vocal music instructor and served as music supervisor for elementary students in two city schools. Over the years she taught music to children from kindergarten through high school in a variety of assignments, including teaching basic class piano to high school students and choral music to students grades 7-12. Karen recounts that she directed 41 school musicals during her career–annual fall musicals for high school students and operettas and musical plays with middle school students, plus Christmas and spring concerts for all grades.

Throughout her career Karen continued to expand her own musical horizons, earning a Masters of Science in Teaching from UWEC in 1977 and doing post-graduate study in music education at a variety of colleges and universities. She has received numerous awards and accolades, including District Teacher of the Year in 1978, being given the Outstanding Educator Award by the Ladysmith Jaycees in 1988 and being listed in Who’s Who Among America’s Teachers in 1990 and again in 2002. Karen was Grand Marshall of the Ladysmith Mardi Gras Parade in 2010 and in 2015 was the recipient of the Wisconsin Music Educators’ Association Community Service Award.

Although she has retired from the school system, “retirement” for Karen has not been sedentary. After retirement she became, and remains, Coordinator of the School Piano Program for Ladysmith schools. She continues to be an accompanist for local choirs, soloists and music ensembles, and also gives private piano lessons. Additionally, Karen is a charter member of the Rusk Area Arts Alliance, and is currently on its Board of Directors.

Karen reports that in the 1960s she was a founding member of the Rusk County Concert Association, forerunner of the current Flambeau Valley Arts Association, which has the purpose of bringing quality professional entertainment to Ladysmith. She has been the President of the FVAA since 2006. Many residents of Ladysmith and Rusk County have enjoyed FVAA-sponsored performances at the Ladysmith High School.

As if these “retirement” activities weren’t enough, Karen also is co-director of the Ladysmith Community Singers, which, she says, is a mixed voice group open to anybody of high school age on up, who likes to sing. “A musical background isn’t required,” she says, “and there are no auditions or dues.” She reports that the group gives a concert the first Sunday in December as part of Winter Magic Week and another in the spring.

When asked what she thinks is the most important benefit of music education in schools, Karen replies that music and exposure to the arts is “as necessary as breathing air.” She feels strongly that schools need to educate “the whole person” and that music and the arts in general help to “broaden horizons, and round people out.”

Anybody wanting more information on the Community Singers or the Flambeau Valley Arts Association can contact Karen Ek at 715-532-6338.