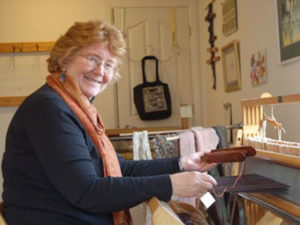 Dear Readers: The word “weave” is defined as interlacing threads, yarn, strands or strips of some material in order to form a fabric. The word is also used to describe the ability to combine many diverse elements into a complete piece, as when a writer weaves a variety of sub-plots into a satisfying, coherent book. In today’s column we’ll meet Nancy Wheeler, a master weaver both in the sense of creating beautiful fabric and in her ability to “weave” area artists and the community together in a way that benefits both.

A California native, Nancy and her family moved to Ladysmith in 1988 where both she and her husband, Wayne, began teaching at Mt. Senario College. Nancy says she had done small weaving before coming to Wisconsin, but never on a loom. She relates that her weaving became a serious avocation when two unconnected events happened the same day. First, Nancy had tea with Dorothy Atchley, the wife of a new Mt. Senario faculty member, who mentioned she was a weaver and offered to teach Nancy to weave on a loom. Nancy remembers observing that looms were not readily available in the Ladysmith area. She recounts that a short time later her husband called, saying he saw a card on a school bulletin board advertising a loom for sale. So on the same day, says Nancy, “I had a loom and a weaving teacher enter my life.”

Today Nancy has a weaving studio at Toad House, in Ladysmith, where she creates her fabrics and enjoys talking with visitors about her work. Nancy says that although she does an occasional wall hanging, she prefers to weave practical, useable pieces, such as scarves, towels, place mats and table runners. She adds that she now has three floor looms, a table loom, made in 1926, and an “inkle loom” for weaving narrow bands. With an eye to the environment, Nancy weaves out of recycled products, such as garbage bags, newspaper wrappers, sock tops, and old jeans. She also uses weaving yarn made from bamboo and wood pulp, called “tencel.”

In 1995 Nancy and Dorothy Atchley, along with several other weavers, founded the Flambeau Area Fiber Arts Guild (FAFA Guild) whose members meet to “share their passion for fiber arts” such as basketry, weaving, spinning, felting, knitting and bobbin lace making.

Nancy says she had long dreamed of having an art center in Ladysmith that would enable area artists, whatever medium they work in, to become better known in the community, and make “art,” in its many forms more accessible to the public.  In 2006, after discussing her ideas with area artist and writer, Bill Fucik, who encouraged her to move forward, Nancy put a notice in the Ladysmith News saying anybody interested in forming an arts council or arts center should come to a meeting at the Ladysmith Visitors’ Center/ Chamber of Commerce. That meeting led to the founding of the Rusk Area Arts Alliance (RAAA), which is headquartered at Toad House, 711 Lake Ave. West, in Ladysmith. Nancy, the organization’s president, stresses that no one has to be an artist to join RAAA. The group welcomes anybody interested in RAAA’s mission of “bringing the arts and community together” through volunteer time, financial support or offering ideas for creating an art-friendly community.

Nancy’s weaving is available at the RAAA Gift Gallery, 711 Lake Ave. West, in Ladysmith and at Sievers School of Fiber Arts on Washington Island, in Door County, WI. She invites visitors to tour her Toad House studio on Saturday mornings when she is usually “in residence,” and adds that anybody interested in joining the Rusk Area Arts Alliance may call her at 715-532-6298 or go on-line at www.ruskarts.org or ruskarts@gmail.com.