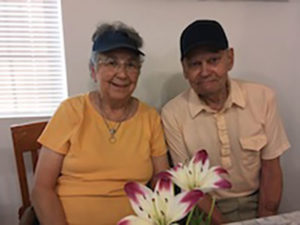 Dear Readers:  Many of us are familiar with the song that begins “The hills are alive with the sound of music. . .” While that song refers to mountains in Austria, today we’re going to meet Don and Georgie Anderson, who for many years have made our own Blue Hills, and the rest of Rusk County, come alive with their music.

Both the Andersons were born in Rusk County–Georgie in Ladysmith and Don in Hawkins–and both have been interested in music, particularly country and polka music, from early childhood.

Georgie relates that she taught herself to sing country music by listening to it on the radio. Her father bought her a guitar, which she taught herself to play, and by the time she was ten years old she was singing on the Barn Dance program on WLDY Radio in Ladysmith. Soon thereafter she began playing and singing with her sister, Sally, at the Unique Theater, also in Ladysmith. Although as an adult Georgie worked as a medical receptionist, she remained an active performer with a number of area music groups.

Don, whose “day job” was as a construction worker and bricklayer, relates that he came from a musical family, with his parents and brothers playing a variety of instruments, including organ, mandolin, fiddle, guitar and “button board” (accordion).  Don learned to play guitar, harmonica and piano and as a youngster performed throughout Rusk County with his family’s band.

The Andersons first met in 1971 when Georgie was performing with The Wranglers, a country and polka group headed by Betty and Everett Siemund.  The group needed an additional player, who turned out to be Don.  He and Georgie began singing together and have been performing together ever since. They were married in 1973 and began appearing with an area group called Louie and the Polka Dots, headed by Louie Havluj. Ever interested in promoting  country and polka music, from 1974-76 Georgie and Don hosted a “Pickin’ and Fiddlin” Contest at “The Farm,” near Amacoy. They recall there were competitions in guitar, banjo and fiddle playing, as well as contests in hog calling and buck dancing.  Don adds that monetary prizes were awarded in all categories.

In 1983 the Andersons decided to move to a warmer climate and chose Kissimmee, Florida, where they remained for fifteen years. Although they both had jobs in area schools, music was never far from their minds. They continued to play and sing locally, and Georgie recalls that she performed at the Kissimmee Opry with a group called Georgie and the Osceola Playboys.

In 1998 Wisconsin again called to them, and they returned to Rusk County and Ladysmith. Although they consider themselves semi-retired, the Andersons still play and sing for residents of local nursing homes and assisted living residences, and Georgie is currently the activity director at Care Partners and Country Terrace in Ladysmith.

Don and Georgie are now in their seventh year of scheduling “Music in the Park,” a series of weekly concerts, running from June through August, at Memorial Park in Ladysmith. They relate that they need to begin scheduling right after New Year’s in order to get the calendar set up, and they have to be ready to fill in as performers if a group  or solo performer has to cancel an appearance.

The Andersons  haven’t made any CD recordings, and have cut back on their public performances, but they are active members of the Rusk Area Arts Alliance (RAAA) and work tirelessly to promote the arts in Rusk County, and especially their beloved brand of music.