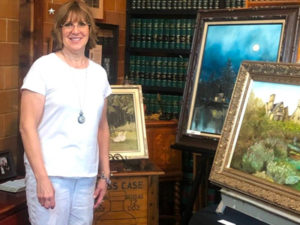 Dear Readers: In a recent column we featured an area photographer who prefers to take monochromatic pictures in black and white or sepia in order to bring out the“essence” of the photo subject. Today we’re going to do an about face and meet Julie Brockbank, a local oil painter who employs a wide variety of colors in her vibrant artwork, and enjoys mixing paints to create her own particular color palette.

Julie was born in Wausau, Wisconsin but says the families of both her parents were from Ladysmith so from an early age she frequently visited relatives here. Asan adult she moved to Rusk County in the 1970s and she and her family have lived here ever since.

Painting, particularly oil painting, Julie says, has been part of her life since early childhood. Her mother was an oil painter, as was one of her aunts, and her father also tried his hand at oils while in service in Korea. She recounts that her mother’s family was from Belgium, and the background and traditions of fine European oil painting have been powerful influences on her mother, aunt and herself. Although Julie says she took art classes in school, mostly she learned painting technique from her mother and aunt, and often assisted her mother at area art shows.

“Eclectic” is the word Julie uses to describe both the subjects she paints and the surfaces on which she paints them. Landscapes, florals and wildlife are among her favorite painting subjects, as are portraits, both of people and pets. Julie relates that she prefers to paint on traditional canvas, but does a considerable amount of painting on other, more unusual surfaces, such as rocks, furniture, mirrors, dried mushrooms, and even antlers. She reports that she occasionally does some pencil sketching and also works with “oil pastels” – a technique involving the use of oil pencils and a brush with mineral spirits. In addition, Julie creates notecards based on her paintings. She also does commissioned paintings, and says she will work from photos, or in person. Julie adds she confers with the person commissioning an artwork while it is in progress, so adjustments can be made, if desired, while the painting is still workable.

Although she has tried watercolors and acrylic paints, Julie says her preference has always been for oils. She explains that besides their traditional use in her family, she likes their “rich texture and earthy colors.” Julie also appreciates their “blendability and workability,” meaning that oils don’t dry out too quickly, giving her more opportunities to make adjustments to her artwork while the paint is still pliable.

Besides working with oil paints, Julie says she also enjoys mixing her own colors to create the exact tones and hues she wants for a particular project. She says she starts with about half a dozen basic colors and then begins adding and mixing until she gets the precise effect she wants.

Julie says, with a smile, that her living room is her art studio. She admits this sometimes raises eyebrows, because people tend to think an artist should have a completely private workplace. But Julie maintains her living room is surprisingly convenient to everything she needs for her artwork, and she has no plans to change her current setup.

Anybody wishing to view or purchase Julie’s work can find it at the Rusk Area ArtsAlliance (RAAA) Gift Gallery at Toad House (711, Lake Ave. West) in Ladysmith, and at the Fine Arts Center and Gallery, 105 Miner Ave., in downtown Ladysmith. She adds that her work can be seen on both the RAAA and Fine Arts Center websites, and that she can also be contacted at 715-532-5372.