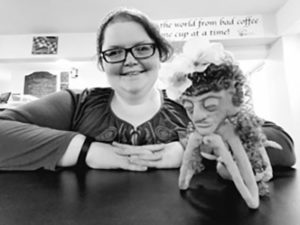 Dear Readers: Spring, Summer, Fall, Winter — the four seasons seem to provide endless inspiration for artists of many kinds, from poets and painters to dancers and musicians.  Here in Rusk County the seasons have helped Erin Fiser find a theme for her work as a budding sculptor.

Erin, who grew up in Ladysmith and currently lives on a farm near Tony, has been interested in many forms of art from an early age.  Upon completing high school she first attended Vermilion Community College, in Ely, Minnesota, where her studies focused on art with an emphasis on music and theater, and then attended the University of Wisconsin — River Falls, where she received a Bachelor of Science degree in music.

Immediately after college Erin moved to La Crosse, WI where she joined the volunteer AmeriCorps – which she describes as a domestic Peace Corps – and also worked in a local movie theater. After the death of her father, Erin moved back to Ladysmith to assist her grandmother, and became interested in getting involved with the art community in Rusk County. Through her grandmother, Elaine Fiser, Erin was introduced to the Writers’ Exchange, a group of Rusk area residents who are interested in writing. Erin joined the group and says she has now completed several short stories which she hasn’t yet tried to publish. Erin also became a volunteer at Toad House, a multi-faceted arts center in Ladysmith, and it was here that her interest in sculpting began.

After taking a sculpting class at Toad House, where Erin says her first project was a hand puppet made of wood clay, which she describes as wood pulp mixed with a clay medium, she next sculpted a fairy, using a material called plastic clay. Deciding she didn’t like her creation, she put the incomplete figure aside. But when she revisited the sculpture some time later, Erin decided though it didn’t look like a traditional fairy, it was appealing enough to finish. She experimented by putting a bird’s nest atop the figure’s head and covering the body in moss.  Deciding her new sculpture was masculine and looked spring-like in his mossy attire, she named him “Askr” and gave him the title of “season guardian.” Erin was so pleased with the finished “Askr,” that she made him the prototype for three other season guardians – “Samira,” the guardian of summer, “Jorah,” the autumn guardian, and “Yuki,” who presides over winter.  While “Askr,” has been sold, Erin reports the other three seasonal figures are available for purchase.

Continuing with the creation of fanciful figures, Erin is currently working on a figure called “Neo,” which she describes as a “dessert yogi,” “Kolbald,” a dragon-like creature, an as yet unnamed pirate queen, “Harper,” a fusion of human and elephant, and a yet-to-be-named merman. Erin reports that all her figures so far are sculpted in plastic clay and all are sized to fit on a table top or shelf.

One of the things Erin particularly enjoyed studying in her college days was prop design – a skill which today serves her well in her work as a sculptor. When beginning a new figure, Erin says she first creates a wire framework and experiments with positioning it in various poses. Repeatedly repositioning the framework helps her decide what the finished sculpture will become.

Erin’s fanciful sculptures can be seen at the Rusk Area Arts Alliance Gift Gallery at 711 Lake Ave. West in Ladysmith. Erin is also available to do commissioned sculptures and can be reached at her e-mail address: enigmaharper@yahoo.com.