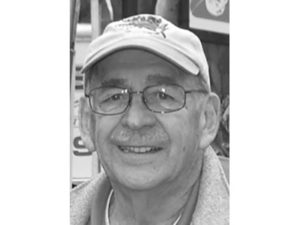 Born in Detroit, Michigan, Bill attended the University of Wisconsin-Madison and graduated with a Landscape Architecture degree. This led to an interest in city planning, an area in which he earned a Master’s Degree from the University of California-Berkeley, then did Ph.D. work at the University of Copenhagen-Royal Academy of Fine Arts, in Denmark. He went on to a career in city and regional planning, first in Detroit, then the State of Michigan, and later with the Department of Housing and Urban Development (HUD) in Chicago.

Bill also found time to cultivate his interest in acrylic and oil painting and took several classes at the Art Institute of Chicago. He continues to paint and draw, and says since he’s interested in astronomy, things relating to “space” are favorite painting subjects. Locally, Bill’s paintings have been exhibited at the Rusk County Library in Ladysmith.

While not outer space, Bill still managed to get closer to the stars when he earned a pilot’s license at age seventeen, and he’s been flying ever since. Today he owns a 1940 vintage Piper Cub J3 which he still flies on occasion. In 1994 Bill and his wife, Lolly, moved to their present home in Big Falls Township. Besides appreciating the area’s natural beauty and wildlife, Bill says they bought their 480 acre property partly because it has its own landing strip.

Long interested in creative writing, Bill has been instrumental in making writing an important part of the Rusk arts scene. He recalls in 1997 he took a course taught by Bruce resident Marilyn Zielke called “Writing Your Life Story.” He and Mrs. Zielke became friends and she suggested he take over the class from her, which he did for five years. Bill, Marilyn and several other class members became the nucleus of the present Writers’ Exchange, which was founded, says Bill, to promote creative writing in Ladysmith and Rusk County. The group first met in the fall of 2005 and now meets twice monthly at the Pioneer Bank in downtown Ladysmith. Bill is the chairman of the Writers’ Exchange and encourages anybody who enjoys writing and wants to know more about the group to contact him by phone at 715-532-6606 or by e-mail at wolfhill@chipvalley.com.

In 2006, Bill happened to meet fellow Rusk arts enthusiast, Nancy Wheeler, at the Ladysmith Farmers’ Market, and they talked about the need for an organization to promote the arts in Rusk County. Out of that conversation arose the Rusk Area Arts Alliance (RAAA), now celebrating its tenth year of providing encouragement and support to area artists working in many different mediums.

As for his own writing, Bill enjoys the Japanese poetry form called haiku and has had haiku published in a number of poetry journals and magazines. He has also had short stories and articles published in a variety of trade publications. In 2014, Bill was instrumental in publication of a book of writings by members of the Writers’ Exchange entitled Tall Tales, Poems and Life Stories. He reports that he is currently working on his memoirs, which could run to volumes considering the range of activities and interests of this multi-faceted man.